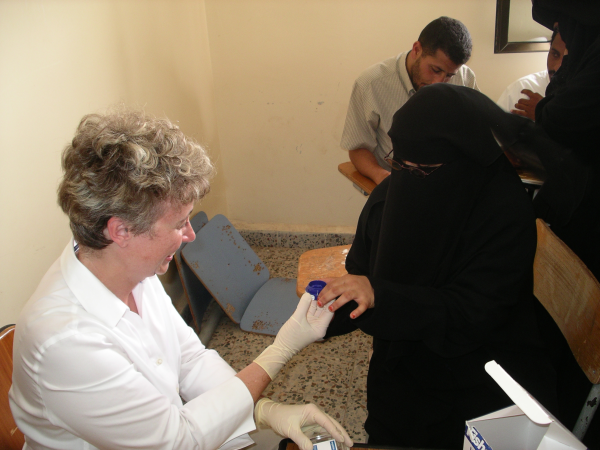 The Genetic Link welcomes guest blog authors. Our first guest submission is from Rachel Dvoskin, Ph.D., with the University of Florida. We thank Rachel for her submission and welcome her as a guest author. I hope you enjoy this article.

At the department of Anthropology and Genetics Institute at the University of Florida, we study genetic variation in modern human populations to answer diverse questions ranging from the route early humans took when they first migrated out of Africa to the underlying causes of racial differences in susceptibility to complex diseases. To explore these varied aspects of human evolutionary history, we spend a lot of time figuring out how to collect DNA from a large number of volunteers. With today's genetic technology, all that's necessary is to obtain a small blood or saliva sample from each of our participants -- a task relatively easy to do in concept but quite a bit more challenging in practice.

When doing this kind of research -- whether at home or abroad -- we come up against a bunch of potential hurdles. Language and cultural barriers can make it difficult to explain what we are doing and what we are hoping to gain from our participants. As a blond, female, American anthropologist who could hardly say hello in Arabic, Dr. Connie Mulligan never expected collecting DNA samples to be as easy as it was in the remote corners of the Middle Eastern country of Yemen. The Oragene/saliva collection kits are non-invasive, simple to use, and even include illustrated instructions right on the package, making their use completely self-explanatory. We had no problem collecting saliva samples from hundreds of Yemeni participants, including many women garbed in the full abaya.

Furthermore, the lack of need for freezing or refrigeration allowed us to travel around the country without worrying about storage conditions. The disks are small and self-contained, and we did not have to carry any separate buffers or processing equipment. The saliva collectors made it possible to obtain large volumes of high-quality DNA. This DNA is used to answer questions about the movement of early humans out of Arabia. We will soon be able to thank our Yemeni study participants by telling them something new about their country's role in the peopling of the world.

We are now gearing up to do a study here in our own backyard in Florida. In collaboration with cultural anthropologists, we are studying how genetic factors and the social environment interact to influence a person's susceptibility to hypertension. Because we are interested in racial disparities in health in the U.S., we chose to conduct our community-based study in Tallahassee, a city with a long history of racial tension and civil rights activism. Given the potential for misuse of genetic information and the rare but horrific cases of unethical medical experimentation on oppressed minorities, it is understandable that people would be fearful or reluctant to participate in a study of this kind. We expect, however, that the non-threatening nature of the Oragene/saliva collection kits will put people at ease and increase participation.

We value highly this simple, non-invasive technique because unlike many studies in which researchers opportunistically collect samples from people who are already being treated in a hospital or clinic, we are instead approaching regular people in their homes -- trying to get a representative sample of all types of people within a community. We think that the more benign and user-friendly the collection techniques, the more useful they will be for our research and for future work with minority groups and previously unsampled populations. This includes people in regions where lab or storage facilities are scarce as well as populations that have been overlooked or underrepresented in medical and health research.