a blog providing new insights into Microbiome Collection and Stabilization by DNA Genotek. DNA Genotek is a subsidiary of OraSure Technologies, Inc.

Are these popular diets the best solution to reduce IBD and gut microbial dysbiosis?

END_OF_DOCUMENT_TOKEN_TO_BE_REPLACED

Are these popular diets the best solution to reduce IBD and gut microbial dysbiosis? 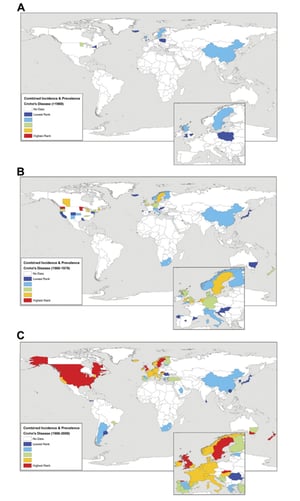 What should I eat? - One of the most common questions asked by Inflammatory Bowel Disease (IBD) patients. The role of diet has become increasingly important in the prevention and treatment of IBD.[1] In recent research, changes in the human gut microbiome have been detected in different forms of IBD such as Crohn’s disease (CD) and ulcerative colitis (UC), supporting the hypothesis of dysbiosis as a relevant component to IBD pathogenesis.[2] Researchers discovered that the gut microbiome of African children were rich in Bacteriodetes and poor in firmicutes and Enterobacteriaceae, while the results obtained from European children was the opposite due to differences in their diet.[3]

Animal fat and carbohydrate based diets lead to specific enrichment of Bacteriodes and Prevotella in adults. Typical western diets have been associated with low microbial diversity in the gut, in contrast to other diets around the world.  This “western lifestyle” triggers intestinal inflammation and caused a dramatic increase in IBD in the last half-century.[2] Throughout the years, many countries have begun to adapt the western lifestyle, increasing IBD incidence (see maps highlighting world-wide increase in CD from 1960 to 2008. Study performed by Ruemmele F. M. (2016)). [3]

Exclusion diets, such as specific carbohydrate diet (SCD), paleo diet, anti-inflammatory diet, low-FODMAP diet etc., have become popular for reducing IBD. Many lay books have been published over the years claiming that some of these diets are the best solution to reduce IBD. But are they?

In today’s blog to recognize World IBD Day, we will be looking into the two most popular IBD diets: SCD and the low-FODMAP diet to determine whether they are as successful as the lay books claim them to be.

SCD was based on a theory that disaccharides and polysaccharides pass undigested into the gut, resulting in bacterial and yeast overgrowth creating an over-production of mucus. This malabsorption was suggested to cause intestinal injury. To prevent more damage, a strict diet was recommended. SCD allows consumption of only monosaccharides (glucose, fructose and galactose) and restricts the intake of simple carbohydrates. Although, this diet is known to be quite difficult to sustain.[1]

Table 1. Characteristics of the specific carbohydrate diet. Study done by Gottschall E, referenced by Knight-Sepulveda et al. It describes the included and excluded food groups for this particular diet.[1]

A study by Godny et al. evaluated the short-term effects of SCD with IBD patients:

What is interesting is that Enterobacteriaceae is known to be associated with a high-fat diet, yet patients reported to have a greater improvement in symptoms after SCD. Therefore, the effect of SCD on inflammatory markers was considered ambiguous.[4]

Another important factor to note is that SCD is known to have the potential to cause vitamin D deficiency, which is an important concern because the human body needs sufficient vitamin D for immune function, particularly in the digestive tract.[3]

The low-FODMAP diet eliminates foods that are high in FODMAPs (fermented oligo-, di-, and monosaccharide and polyol carbohydrates). Though it is a very restrictive diet, it has been reported to be successful with the majority of IBD patients. It is similar to SCD however, the difference between the two is that the low-FODMAP diet is more restrictive.[3]

Table 2. Characteristics of the low-FODMAP diet. Study by Gibsen PR et al, referenced by Knight-Sepulveda et al. It describes the included and excluded food groups for this particular diet.[1]

Pedersen et al., studied the change in gut microbiota in IBD patients before and after 6 weeks of the low-FODMAP diet. Their results:

They determined that the low-FODMAP diet decreases gut microbiome dysbiosis for only half of the patients and all claimed to have significantly improved symptoms, despite only 50% of patients having a reduce dysbiosis.[1]

These studies indicate that the impact of both the SCD and low-FODMAP diet on IBD is inconclusive. While many patients described their symptoms as improving, analysis of their gut microbiome did not reflect these improvements. Therefore the authors conclude that more studies need to be conducted.

When it comes to studying the diet and IBD, the study of the gut microbial changes is crucial to help determine whether these diets actually work. When collecting stool for these studies, it is important to have the best collection method to ensure you receive the best results. The OMNIgene·GUT self-collection kit provides the means to effectively collect and stabilize microbiome profiles from donors undergoing dysbiosis. The intuitive design of the optional spoon accessary combined with OMNIgene·GUT allows for an easier collection process and in home use for donors.[2]

“Commercially available systems [like] OMNIgene·GUT… are optimal tools for the assessment of human faecal microbiota composition and are being used in the MINUTE for IBD project due to their high convenience and reliability.” – Panek et al.[3]

For more information regarding the use of OMNIgene·GUT and IBD studies, please read our blog Collect and stabilize gut microbiota samples from IBD patients undergoing dysbiosis or contact us to request free OMNIgene·GUT collection kits for evaluation.

From donor to data, samples begin their journey to powering microbiome research when the donor captures t...
Charles Harkness Dec 6, 2021 6:44:50 PM
The information presented in this blog is made available for general information purposes and may include content provided by third parties. We do not warrant the accuracy, completeness or usefulness of this information and disclaim all liability arising from reliance on it. The statements and opinions expressed in these materials, other than the content provided by us, are solely those of the person or entity making the statements.