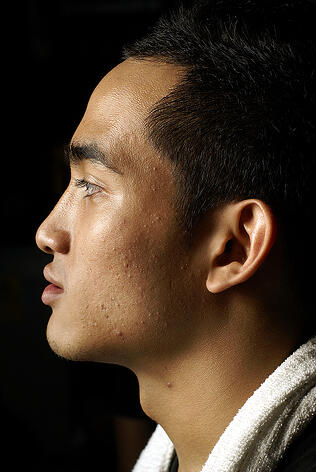 Atopic dermatitis (AD) and acne vulgaris (AV) are both skin diseases studied by researchers at the Institute of Medical Biology (IMB), Singapore, with the goal of discovering new treatments and strategies that will improve patients’ quality of life. Oragene•DNA was considered the key method for DNA collection for this research. A type of eczema, AD is a non-contagious and chronically relapsing skin rash that is often made worse by allergens such as pet hair or wool. It has been shown to be hereditary, but the specific role of genetics has previously been unclear. What is clear is that when parents have an atopic disease, like hay fever or asthma, the risk to their children of developing AD is significantly higher than the risk to children without a family history of atopic diseases. DNA collected from AD patients helped to narrow down the genetic markers linked to this skin condition.

Like AD, AV is non-contagious and has been shown to be hereditary.  It is also more common than AD, affecting 60-70% of the population at some point in their lives, and often appearing during adolescence with the onset of puberty. Unlike AD, AV tends to diminish with time, usually disappearing in the patient’s early twenties. While hormonal activity is believed to contribute to the formation of AV, the tendency to develop AV does run in families.

With the hope of developing better methods for managing, treating and preventing both conditions, researchers at the IMB designed studies to examine how molecular changes can affect these conditions.  In regards to AD, the spectrum of fillagrin-null (FLG) mutations was studied in Singaporean Chinese individuals, and the association of FLG mutations with AD and its clinical markers was investigated.

Given that the target population for the AD study was 2-21 years old, researchers needed to make participation as easy as possible for the young patients and their caregivers. The clinic in which DNA samples would be collected was also not in the same location as the lab: DNA samples would need to be stored at the clinic until being transported to the lab.  Oragene•DNA provided a completely non-invasive option for collecting DNA, and it met the team's requirements for both high-quality and high-quantity DNA. This, in addition to its long-term stability at room temperature led Oragene•DNA to be considered as the best collection method for the AD study.

As the study evolved to include adults and AV patients, researchers decided to offer blood sample collection in addition to the saliva-based collection using the Oragene•DNA kit. To date, 75% of the 500 participants in the AV study provided a saliva sample as opposed to a blood sample, and 500 samples for the AD study were successfully collected using Oragene•DNA.