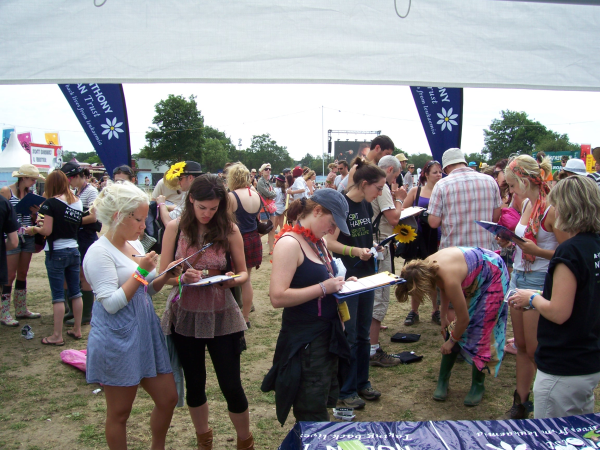 For the second time, DNA Genotek will be working with Anthony Nolan, the charity which runs the UK’s largest blood stem cell donor registry, to collect saliva samples at the Isle of Wight Festival, June 21-24, 2012. The Isle of Wight Festival is a music festival which takes place every year on the Isle of Wight in England. Many notable artists have performed at the festival including the Rolling Stones, Paul McCartney, David Bowie, and Coldplay. This year, Bruce Springsteen headlines with an expected attendance of 80,000 people. Our participation in this event supports Anthony Nolan as they strive to increase the number of young men in their registry. The festival attracts participants who meet Anthony Nolan’s donor profile of young men aged 18-30 which provides an excellent opportunity to grow the registry.

We originally worked with Anthony Nolan at the 2010 Isle of Wight Festival where over 900 people provided a saliva sample with the Oragene kit and joined the register. These samples are sent to Anthony Nolan’s labs for processing and HLA tissue typing. Typically, one in 1500 people who join a registry are eventually matched to donate blood stem cells for  transplant. In less than 2 years, there have already been 2 matches identified from the 900 samples collected at the Isle of Wight in 2010 and there remains strong potential for additional matches in the future. It’s this success that is bringing Anthony Nolan back to the Isle of Wight in 2012.

In May of this year, DNA Genotek responded to a request from Anthony Nolan for event-based collection support at this year’s Isle of Wight Festival. In the past month or so, we have worked with their marketing team to design banners, postcards and promotional items to support this important event. We used Anthony Nolan’s current slogan ‘Fit to Spit’ which is designed to attract the young men that are most needed for the register. Representatives from DNA Genotek will be travelling to the Isle of Wight in a few days to work alongside with the Anthony Nolan team. While we don’t yet know how many samples will be collected this year, I’m betting we exceed the 900 samples collected in 2010.

This scale of event-based DNA collection would not be possible without the Oragene/saliva collection kit which enables ambient temperature storage and stability of DNA saliva samples. We’re proud to be working with Anthony Nolan on this event and look forward to seeing the outcome.