Genetic evolution of human taste found from saliva samples of hunter-gatherers, nomad herders, and farmers in Africa and Asia

END_OF_DOCUMENT_TOKEN_TO_BE_REPLACED

Genetic evolution of human taste found from saliva samples of hunter-gatherers, nomad herders, and farmers in Africa and Asia

“Taste is essential for the interaction of animals with their food and has co-evolved with diet. Humans have peopled a large range of environments and present a wide range of diets, but little is known about the diversity and evolution of human taste perception.”1

Individual food preferences are highly influenced by our taste perception and taste preference. Taste is one of our five senses that is dedicated to the interaction between living beings and their food. If you travel the world and visit different human cultures, you will notice that humans have high variability in their lifestyles and diets. Little is known about the connection between taste perception and lifestyle, but one research team in Sweden and France wanted to explore this connection by looking at the genetic evolution of human taste.

The science behind human taste...what we know so far.

“Taste is listed among the five main values (taste, health, cost, time, and social relationships) in the Food Choice Process Model, which explains the motivations behind food choice decisions. Sensory perceptions, such as taste sensitivity vary widely among individuals that may partly be explained by genetic polymorphisms located in genes involved in taste perception of the five basic taste qualities and the most recently identified fat taste modality.”  2

There are several types of taste preferences, and humans can perceive 5 different tastes: 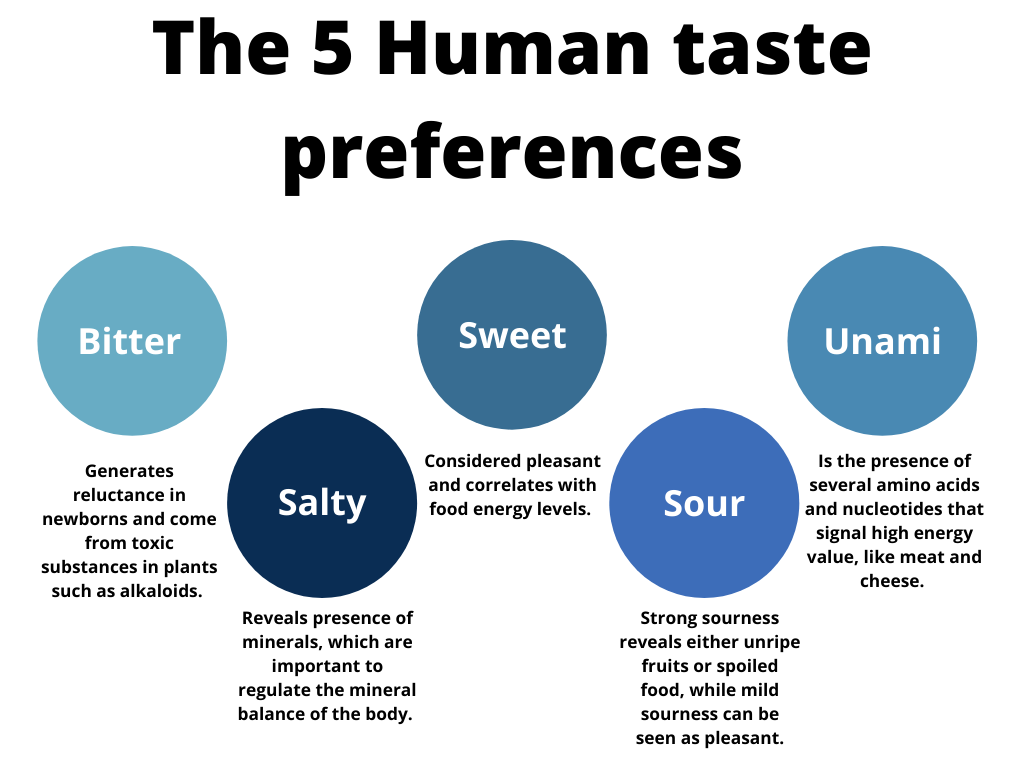 Taste is perceived on the tongue and is mediated by the chemosensory gustatory system (a sensory system that can detect taste and smell).

So, how did we develop these 5 tastes over time? Why do humans all over the world have a vast variety of taste perception preferences?

Sjöstrand et al. wanted to explore these questions by looking at the evolution of our diet, lifestyle, and taste perception. To do that, they investigated potential local genetic adaptation to environments, biodiversity, and diet diversity among neighbouring human groups which represent the human past and present, based on their current differing lifestyles and local environments. They tested four populations from Uzbekistan in Central Asia and Cameroon in Africa (shown in the picture below) and collected DNA from saliva samples using Oragene•DNA and taste-recognition tests. 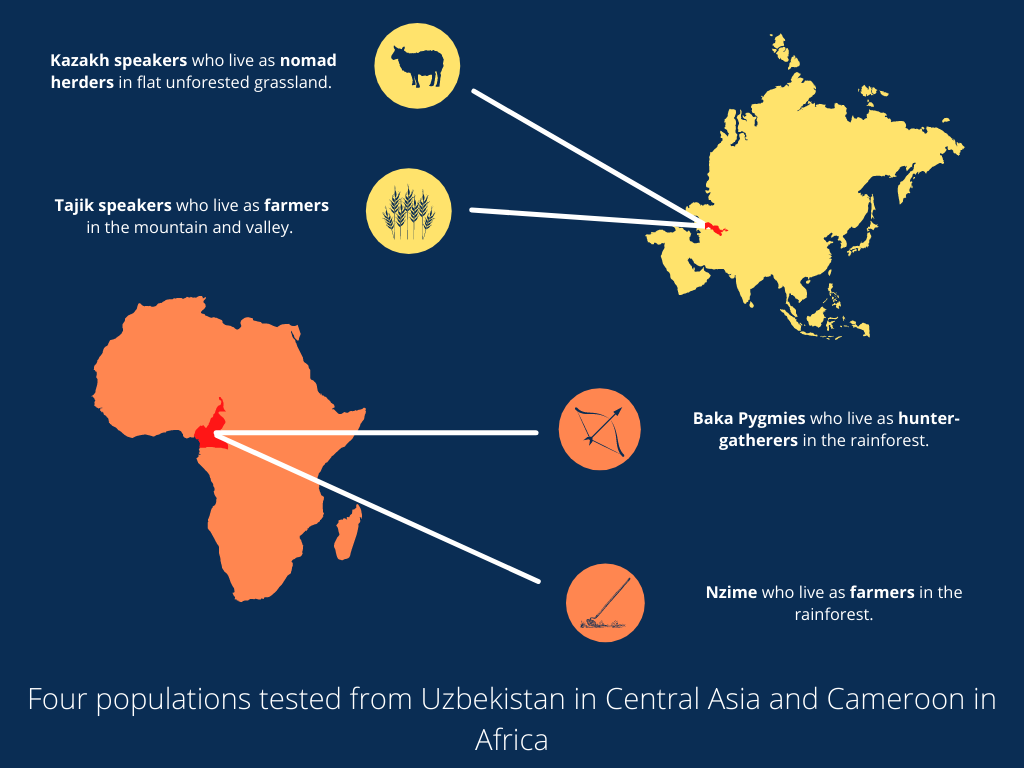 When investigating the phenotype differences among the populations, Sjöstrand et al. also measured the overall sensitivity which averaged all the phenotypes measured in each participant.

The evolution of taste perception in humans

Baka Pygmies and Nzime of Cameroon in Africa.

For overall sensitivity, Bakas were found to be less sensitive than Nzimes. The Nzimes were better at detecting fructose (sweet) and quinine (bitter) than the Baka participants. Forest environments have been suggested to be poor environments (in terms of food energy levels) to survive in without agriculture, so the Baka Pygmies cannot afford to be “picky” about their food in their rainforest environment which is why their taste sensitivity is less overall compared to the Nzime farmers. 1

“Farmer groups like Nzimes, have been more specialized in their food consumption, and in this case, being sensitive to taste might help them to identify spoiled food. An alternative explanation is related to the fact that farming communities are hosts for a multitude of infectious diseases that hunter-gathering communities typically are not immune to [which can explain why Nzimes are more sensitive to bitter taste than the Bakas].” 1

Kazakh and Tajik of Uzbekistan in Central Asia.

For the Kazakh nomad herders and Tajik farmers, the study found no difference in the overall sensitivity but learned that the Kazakhs were significantly better at detecting salt while the Tajiks were better at detecting fructose (sweet). The Kazakh nomad herders are known to have a diet with a higher concentration of salt, as salt is used as a conservative for meat and dairy products.

When looking at their genes, the team found that the SCNN1B gene was enriched in the Tajik farmers. This gene codes for a beta-subunit of the receptor for salt reception, suggesting that there was an evolutionary change in the ability to perceive salt for lower sensitivity in the Tajik farmers.

The gene that reflects the difference in fructose (sweet taste) perception is TAS1R2 which codes for a subunit of the heterodimeric receptor for sweet taste.

“Central Asia is the cradle of several fruit tree domestication events which is likely to have changed the agriculturally based diet of the Tajiks more than the herder diet of the Kazakhs.” 1

Two other notable genes found were GRM7 and RTP4. GRM7 codes for a receptor involved in conditioned taste aversions (a strong dislike of specific food or foods). RtP4 regulates bitter perception, and both these genes are enriched in Kazakh nomad herders, suggesting that there was an evolutionary change in the Kazakh’s bitter taste perception.

The genetic basis of taste perception shaped by lifestyles.

You can access the full publication to learn more, here: Taste perception and lifestyle: insights from phenotype and genome data among Africans and Asians

If you would like to learn more about collecting DNA from saliva or have any questions, you can email us at info@dnagenotek.com or click the picture below to request a free trial of Oragene•DNA collection kits to try.

Highlights of our experience at AACC 2022

Highlights from the American Society of Human Genetics conference 2022

From October 2 to 5, 2022, the 11th International Conference on Canine and Feline Genetics and Genomics (...
Sanna Abbasi, PhD Oct 13, 2022 9:40:43 AM
The information presented in this blog is made available for general information purposes and may include content provided by third parties. We do not warrant the accuracy, completeness or usefulness of this information and disclaim all liability arising from reliance on it. The statements and opinions expressed in these materials, other than the content provided by us, are solely those of the person or entity making the statements.