END_OF_DOCUMENT_TOKEN_TO_BE_REPLACED

From October 2 to 5, 2022, the 11th International Conference on Canine and Feline Genetics and Genomics (ICCFGG) took place in the United States in Huntsville, Alabama. ICCFGG promotes scientific discussion on a wide range of topics including new insights, recent developments, and best practices around canine and feline genome initiatives. This conference attracts both scientists and clinicians who study hereditary diseases, cancer, evolutionary biology, etc. in cats and/or dogs.

DNA Genotek was pleased to attend this conference in-person and meet with many of you! For those who were interested but unable to attend, some of the key talks and discussions on feline and canine research from the conference are summarized below.

The 99 Lives Cat Genome Sequencing Initiative (often referred to as the “99 Lives Project” or “99 Lives Initiative”) is a public research effort to develop genetic tools for state-of-the-art healthcare for companion cats and involves 30 institutions (e.g., the Hudson Alpha Institute for Biotechnology, Maverix BIOMICS, National Geographic, Zoetis, and Texas A&M University, to name a few). One of the main reasons Dr. Lyons began the 99 Lives Cat Genome Sequencing Initiative was because the cat research community was relatively small (compared to the dog community) and could greatly benefit from collaboration.

Unlike humans who have 46 chromosomes in total (23 pairs), cats have 38 chromosomes (19 pairs). In line with the recent advances in sequencing technologies, the 99 Lives Project seeks to sequence the complete or “whole” genome of multiple cats, compare their DNA sequences, and identify specific mutations or “variants” that are associated with feline traits (e.g., coat color, tail type, etc.) and causal genes for disease risk.

As of October 2, 2022, the 99 Lives Cat Genome Consortium dataset is composed of 340 whole genome sequences from cats that have been aligned to the Felis catus V9.0 reference genome to identify specific mutations/variants. Several breeds of cats—99 cats from 33 recognized breeds—are represented in the dataset including random, mixed, and unknown breeds. Several variants have thus far been identified from the 340 feline genomes. Out of the 3 million variants identified, the 99 Lives Project focused on ~600,000 causal variants as it was difficult to study the remaining variants found outside coding regions.

In the future, new genome sequencing data should push the next 99 Lives Cat Genome Consortium dataset to ~500 cats. Presently, data from the 99 Lives Cat Genome Consortium has led to over 12 publications from 8 different laboratories and researchers are now looking to put together working groups to study hypertrophic cardiomyopathy, amyloidosis, imputation, and genetic testing standardization.

In her presentation, Dr. Ostrander introduced the audience to the Dog10K project. Initiated in 2016, Dog10K is an international sequencing effort to advance the study of canine domestication, phenotypes, and health by using the genomic sequence from 10,000 canines. As a worldwide consortium, this project aims to incorporate whole genome sequencing (WGS) data from the world's established dog breeds, wild canids, and village dogs from representative locations. For all the genomes included at present, primary sequencing was conducted by Novogene and files were returned to the Dog10K analysis team for joint variant calling and primary analysis.

Strategic sampling was employed for the types of dogs included in the Dog10K cohort. Samples were collected globally (with ~3-5 samples from each breed), and specific samples were selected to maximize genetic studies of disease susceptibility, behavior, and morphology. Rare and niche breeds were also sampled though more are still needed.

The Dog10K Project is still ongoing and has yet to reach 10,000 canine genomes. Currently, the project is in the process of collecting samples from rare and underrepresented dog breeds. One of the main objectives of the Dog10K Project is to advance studies of genome architecture such as estimating mutation rates for SNVs, CNVs, and mobile element insertions (MEIs) to improve our understanding of the mutation process.

Dr. Karlsson began her talk by emphasizing an important takeaway from large-scale human WGS efforts: in genomics, sample size is more important than (almost) anything else. The greater the number of samples in your study, the greater the number of loci that can be identified (more samples = more power). For example, multiple sequencing samples are needed to conduct genome-wide association studies (GWAS)—a powerful tool for identifying variants associated with specific traits and diseases. At present, sharing and combining datasets is a good way to increase the number of samples in your studies and can help address some of the big questions in genomics:

Although GWAS can provide strong correlational data for predicting disease risk, model organisms are still needed for the development of interventions and to assess environmental impact on disease development. Dogs are an excellent natural model for genomic studies as they have a shared environment with humans, have a large population size, and receive sophisticated medical care.

Dr. Karlsson went on to discuss two of her canine sequencing projects, both of which used PERFORMAgene™ (PG-100)—an all-in-one swab kit for collection, stabilization, and transportation of animal DNA samples. First, the Darwin’s Ark project—initiated by Dr. Karlsson’s laboratory—follows the 23andMe human model whereby any dog from any country can be enrolled with their owner completing a survey and providing a DNA (saliva) sample from their pet. Darwin’s Ark is an open platform where pet owners can pay to sequence their dog’s genome to learn more about their pets. At present, Darwin’s Ark has enrolled 40,356 dogs and sequenced over 3250.

Second, the Dog Aging Project (DAP) is a long-term longitudinal study of biological and environmental determinants of healthy aging, mainly involving the University of Washington and Texas A&M University. DAP enrolls any dog from the U.S. (all ages, sizes, and breeds) and has enrolled ~40,000 dogs thus far. Data from DAP will be publicly available.

Accounting for 1-2% of all tumors in dogs, invasive urinary/urothelial carcinoma (iUC) (also referred to as “bladder cancer”) is an aggressive cancer with an average survival of ~1 year that affects all dog breeds, with over 50,000 dogs affected each year.

Certain canine breeds are more susceptible to iUC; for example, the Scottish terrier has a 20X increased risk of developing the disease while the Shetland sheepdog is diagnosed with iUC roughly 6X more frequently than other dog breeds. In her presentation at ICCFGG 2022, Dr. Parker focused on the results of her research team’s Shetland sheepdog GWAS to identify cancer-causing genes and/or mutations.

Looking only at Shetland sheepdogs with and without iUC, the GWAS results showed that there was an association between affected dogs and a specific locus on chromosome 13. This DNA locus spans a vast region of ~20 Mb, contains over 20 genes, and includes several long, non-coding RNA. By sequencing the locus in several affected and unaffected Shetland sheepdogs, Dr. Parker noted that they were able to identify a candidate cancer-causing mutation/variant in a gene, NIPAL1, found on the chromosome 13 locus.

While Dr. Parker outlined a possible role for NIPAL1 in cancer, she cautioned against drawing conclusions as several other variants and genes were also identified in the study. Future experiments will be conducted to learn more about the identified variant in NIPAL1. Already, other loci (including other sites and regulatory regions) are being analyzed to determine which variant may be involved in the development of iUC.

Dr. Raffan began her presentation by introducing the topic of her laboratories’ research in the context of obesity as a global health issue. Several factors, including environment and genetics, are behind the biology of obesity, and Dr. Raffan pointed out the striking fact that:

Most of the world’s population now live in countries where their health is more threatened by overeating than undereating.

Dr. Raffan and her group study dogs as a model animal for obesity. Broadly, dogs are considered a good model for human diseases as they can develop the same diseases as humans (e.g., obesity is seen in dogs too) and share the same environment as their owners. Dr. Raffan’s research initially focused on Labrador Retrievers—well known for being a highly food-motivated dog breed.

In her presentation, Dr. Raffan detailed her research team’s previously published work on uncovering a mutation in the POMC gene in both Labrador and Flat-coated retriever dogs that was associated with increased fat, weight, and food motivation behavior. She also briefly touched on additional experiments that have since been conducted that recapitulated the published results. From the additional experiments, Dr. Raffan concludes that this mutation in POMC causes obesity not only through increased hunger but also through decreased energy expenditure in affected dogs.

One of the notable new experiments shared was an inaccessible food task designed to assess the “wanting” or desire by a dog for food. In two highly entertaining video clips, the behavior of a dog heterozygous for the POMC mutation was drastically contrasted to a wild-type dog (containing no mutant POMC alleles) where both dogs were confronted with an inaccessible sausage sealed in a box with a transparent lid. By taking more quantitative measures, the results showed that dogs heterozygous for the POMC mutation had a significantly greater incentive salience in response to a food cue. Following standardization, this difference could be attributed to greater hunger in the heterozygous dogs. 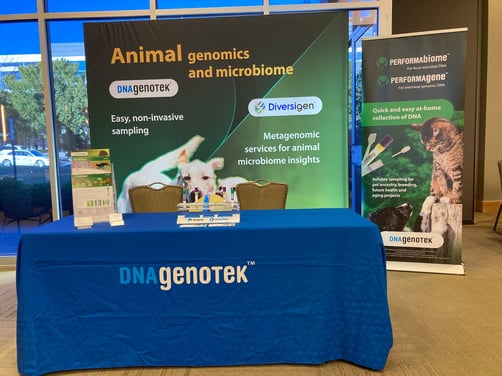 To support your research needs and expand the reach of your sample collection, DNA Genotek's animal line of products includes simple all-in-one non-invasive kits for the collection, stabilization, and transportation of animal DNA samples for genetic analysis (PERFORMAgene™) and gut microbiome analysis (PERFORMAbiome™•GUT).

If you are interested, please click here to request a free trial kit or send us an email at info@dnagenotek.com to learn more about the products we offer!

Highlights from the American Society of Human Genetics conference 2022

Innovation at its furriest: investigating a DNA collection kit for an RNA-based application

Studying genetic diseases using a DNA collection kit
Adelle Keys and Sanna Abbasi, PhD Oct 7, 2022 2:12:28 PM
The information presented in this blog is made available for general information purposes and may include content provided by third parties. We do not warrant the accuracy, completeness or usefulness of this information and disclaim all liability arising from reliance on it. The statements and opinions expressed in these materials, other than the content provided by us, are solely those of the person or entity making the statements.