END_OF_DOCUMENT_TOKEN_TO_BE_REPLACED

“Diabetes is the fastest growing debilitating disease in the world”. - Dr. Al-Anouti and Dr. Al-Safar

In 2015, statistics showed that 415 million people suffer from diabetes worldwide. The rate is expected to increase by 54.5% and reach about 642 million people by 2040.[1] The Middle Eastern population account for approximately 20% of these cases. According to the International Diabetes Federation (IDF), the United Arabian Emirates (UAE) has 745,940 diabetics, 304,000 undiagnosed diabetics, and 934,300 pre-diabetics.[3]  We corresponded with researchers Dr. Al-Anouti and Dr. Al-Safar from Zayed University and Khalifa University to discuss their research on vitamin D receptor gene polymorphisms among Emirati patients with type 2 diabetes mellitus.

Diabetes and the UAE

Type 2 diabetes mellitus (T2DM) is one of the most common chronic disease worldwide and often represented by complications such as kidney failure, neuropathy, blindness, and cardiovascular disease.[2] T2DM is known to develop later in life and involves high-levels of sugar in the blood and decreases insulin function. Studies have indicated that a family history of diabetes, lack of physical exercise, obesity and unhealthy diets are common among T2DM patients. [2],[3] 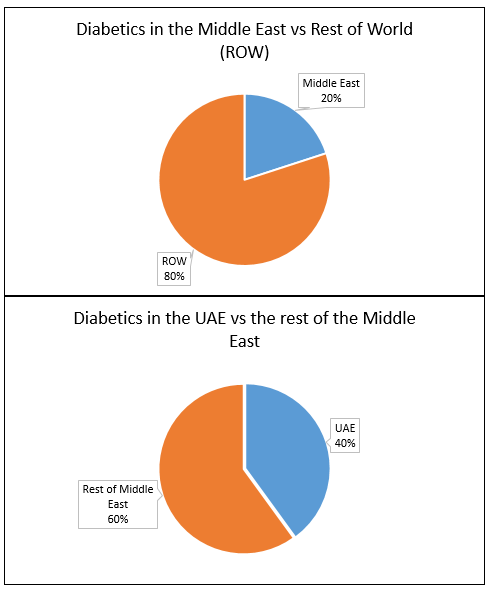 Figure 1. Diabetics in the Middle East and UAE comparison pie charts we created on the IDF statistics from 2015. Please note that these percentages are approximations.

Common gene types in the UAE appear to make the individuals more susceptible to developing diabetes.[4] A recent study in the UAE has shown that several genes including ACE and AGT were significantly associated with the pervasiveness of T2DM

among the UAE Bedouins. Other genome-wide association studies (GWAS) have led to the identification of many genes (FAM60A, DMRTA1m ASB3, ATP8B2, and SLC30A8) susceptible for T2DM and may provide further insight into the UAE population.[3] However, in the UAE there has been a lack of epidemiological studies related to T2DM, as well as, the lack of GWAS regarding the UAE population. Dr. Fatme Al-Anouti and Dr. Habiba Al-Safar wanted to address the need for the development of GWAS studies for the UAE population, and explored the possible link between vitamin D receptors and T2DM.[1],[3]

What do they know so far?

“Vitamin D is a neurohormone used by the body for many functions, like bone metabolism, immunity, nerve function, and now scientists believe it may also play a role in the function of the pancreas and insulin sensitivity, malfunction of which are linked to diabetes.” - Dr. Al-Anouti and Dr. Al-Safar.

It is known that vitamin D is involved with regulation of the transcription activity of the insulin receptor gene. Vitamin D improves glucose tolerance and beta-cell function (which is involved in the regulation of glucose metabolism), particularly insulin secretion in humans. Because vitamin D is delegated by the vitamin D receptor (VDR), the VDR gene is a candidate gene for T2DM.[3]

Figure 2 Effects of vitamin D deficiency and sufficiency. Photo credits to Cell Press: TRENDS in Endocrinology & Metabolism (2018). “The Vitamin D receptor is the mediator that regulates vitamin D functions. A positive correlation between circulating vitamin D levels and inulin sensitivity and VDD, may pre-dispose to glucose intolerance, altered insulin secretion and T2DM, via a mechanism that can be related to direct action via VDR activation.”[3]

“Similar results have also been found in Caucasians of European descent, but explorations in India, believe that the genetic VDR-T2DM link may only appear in certain population groups.” Dr. Al Anouti and Dr. Al Safar.

Recent studies have shown that the gulf region of the Middle East has the highest rate of vitamin D deficiency around the globe, despite their sunny climate.[3]

After accumulating enough evidence of a possible link, Dr. Al Safar and Dr. Al Anouti decided to collaborate on their research. This is the first study that specifically looks at the UAE population.

The project’s Emirati volunteers were a mix of diabetic individuals and healthy individuals, where their DNA was extracted from saliva that was collected using Oragene·DNA.

“All participants were comfortable using the kit. To them, it was much more convenient than collecting blood. And, the DNA yield was very adequate for our use.” - Dr. Al Anouti and Dr. Al-Safar.

Three VDR single-nucleotide polymorphisms (SNPs) were genotyped, and the relationship between the VDR SNPs polymorphisms and the demographic data were analyzed.

Here are some of their results:

The results of this study could guide interventions for people with diabetes, although there is a still a lot of work that needs to be done. They are looking at other genes that are involved with vitamin D metabolism and links with obesity and VDD.[4]

“[Our] next goal for this research is to perform validation studies in other ethnic groups and to expand the cohort size to confirm the project’s findings. The goal is to confirm the identified genes, so they can be added to diagnostic biomarkers that could be utilized in clinics to improve screening and personalized treatment of T2DM patients.” – Dr. Al-Anouti and Dr. Al-Safar.

Highlights and trends from ASHG 2021

Every year, we at DNA GenotekTM attend the largest conference in North America, hosted by the American So...
Katherine Lawless Dec 2, 2021 9:00:00 AM

“Our mission is to extend and improve lives by making genomics a foundational part of everyone’s health a...
Katherine Lawless Nov 4, 2021 9:15:00 AM

2-Minute Read - October 26, 2021
Chiraz Guessaier, PhD Oct 26, 2021 9:00:00 AM
The information presented in this blog is made available for general information purposes and may include content provided by third parties. We do not warrant the accuracy, completeness or usefulness of this information and disclaim all liability arising from reliance on it. The statements and opinions expressed in these materials, other than the content provided by us, are solely those of the person or entity making the statements.